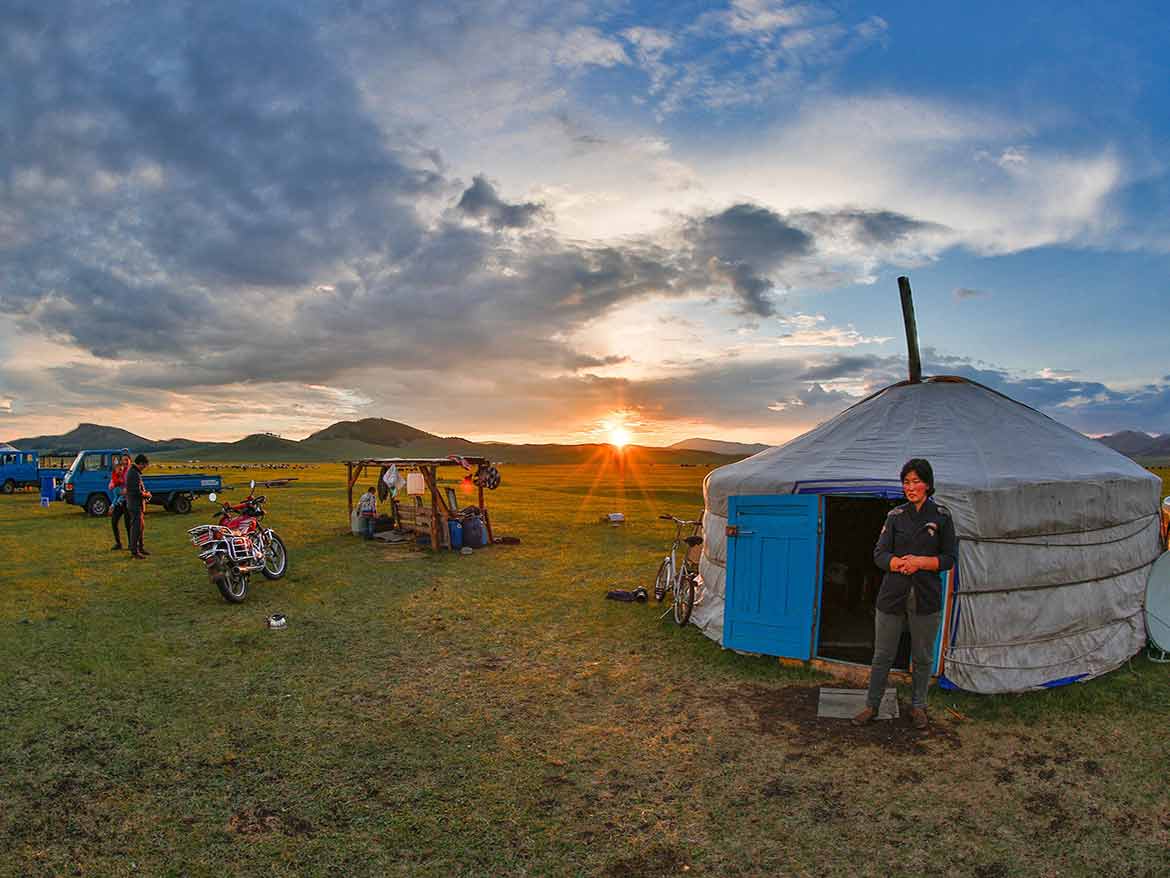 Mongolia is one of the world’s last truly nomadic cultures. For millennia, pastoral herders have lived on almost every corner of Mongolia, moving with their livestock according to the seasons. They still live in traditional felt tents, subsisting on the meat and milk of their animals, and living “as free as the country is wide.”

The trip starts from Ulaanbaatar - a city of contrast where modern life comfortably blends with the traditional Mongolian lifestyle. You will then continue to the countryside with different landscapes including steppe, deserts, rocky vistas and forested mountain hills. During this trip, we will visit UNESCO World Heritage Sites, Karakorum and national parks, relax in wild nature and explore Mongolian nomadic lifestyle… Experiences include camel and horseback riding, excursions to the sand dunes, soft hiking and free driving through the wilderness.

Welcome to Mongolia! Upon arrival, your tour guide will greet you in the arrival hall and accompany you in a comfortable vehicle to your hotel and help you with the check-in procedure.

We leave the rest of the day free for you to explore the nearby area on your own, or to rest before the activities begin. You may need some time to relax and recover from the long-distance flight or from jet-lag.

After breakfast, at 9am our guided city sightseeing tour will start with a visit to Gandan Buddhist Monastery, which is Mongolia’s largest functioning Buddhist monastery, including the Mongolian Buddhist University. The highlight of visiting Gandan is the 85 ft high majestic gilded indoor statue of Migjid Janraisig, the Buddhist Bodhisattva. Continue to visit the Museum of Mongolian National History – the museum presents Mongolian history and culture from prehistoric times to the present day.

Lunch will be at the "Modern Nomads" restaurant, where you will be served national dishes. After this, we will visit Sukhbaatar square (Genghis Square) which lies at the heart of the city surrounded by important buildings such as the government palace, banks, theaters, and post office. There is an equestrian statue of Sukhbaatar and a massive Bronze statue of Genghis Khan with his four warriors in front of Parliament House.

Next we will visit Bogd Khan Palace Museum - the complex was a residence of 8th Bogd Javzandamba in 19th century, the head of Mongolian religion. The palace consists of seven Summer Prayer temples and the winter palace.

At 8 am in the morning our trip starts as we head to the Hugnu Khan National Park. It is a picturesque area of rocky mountains, semi-desert, Gobi sand dunes and steppes, all in one location which represents three different natural zones. After check-in and lunch at the Ger camp near the national park, we will explore the area. This place is ideal for soft hiking, wildlife observation and photography.

After breakfast, we will take short drive to Bayan Gobi’s magnificent sand dunes - surrounded by hills with willow trees, streams and bushes, and appearance of a small desert in the center of the country. This sand dune is 50 miles long and the widest part of the sand dune is about 6 miles. We will explore the sand dunes and visit a local camel herder family in their Ger, and find out about their unique nomadic lifestyle. You will have the option to take part in camel riding. They are gentle, calm and extraordinarily patient animals. Two humps support you from both sides and you’ll find an easy pace on the ride.

We will continue towards a small village and one of the country's major tourist destinations, historically known as Karakorum, which was an ancient capital of the Mongol Empire. Also, this was one of the most important cities in the history of the Silk Road. In the afternoon, we will visit the museum of Karakorum. Not much of the ancient town still exists but the nearby museum provides an excellent presentation on the archaeological research that has taken place at the site, and on Mongol history before and after occupation of the town. You can see artifacts found by the various archaeological expeditions as well as a scale model of the town prior to its destruction.

Karakorum was ancient city of Mongol Empire, which was the largest contiguous land empire in world history. This city, founded by the Great King Genghis Khan in the 13th century, was moved to Khanbaliq (modern Beijing, China) by Kublai Khan He was the grandson and greatest of the successor of GenghisKhan, and the founder of the Mongol (Yuan) dynasty in China. We will continue the tour by visiting the oldest and most magnificent Buddhist Monastery complex of Erdene Zuu, built in the 16th century, with 108 stupas. Here you can listen to monks chanting Buddhist sutras.

Return to the Ger camp for dinner and overnight.

After breakfast, we will depart for the Hustai National Park. The park is home to the last of these wild horses in their natural environment in the world, known as Przhevalsky horse (takhi). Brought back from the brink of extinction, seeing these horses that have been reintroduced into the wild is an unrivalled experience. The National Park has over 450 species of vascular plants, 200 of which are medicinal.

Lunch will be at the restaurant of the information center. In the afternoon, we will visit the information center, explore the national park and go to see the wild horses. This is a great opportunity to take photos of these endangered horses. If you are lucky, you can also see fox, deer, marmot, eagle and more wild animals. Besides the wild animals you can find here, the beautiful scenery of natural Mongolia, featuring mountains and Steppes, is a lovely photogenic spot.

Afterwards, we will take a drive to Mongol Nomadic Ger camp for dinner and overnight.

After breakfast, we will attend a famous show called “Mongol Nomadic Show”, which will show you the authentic Mongolian nomadic way of living and traditional customs and culture of the past. The show demonstrates traditional life for Mongolian nomads, such as the breeding of their five kinds of livestock and movement from one place to another using ox, yak, camel and horse carts.

In the afternoon, our tour continues to Terelj National Park, which is one of the most visited national parks in Mongolia. On the way, we will visit the Manzushir Monastery ruins in Bogd Khan Mt. National Park. The monastery had over 20 temples and was once home to at least 300 monks, but was destroyed in the 1930s. The main temple has been restored and converted into a museum.

A bracing hike to the top of the mountain

Today you will have free leisure time until lunch. You can go for walks and go hiking around the camp. This is a great opportunity for viewing local wildflowers. In the afternoon, we will explore the national park and visit Turtle Rock - an interesting rock formation that looks like a turtle. We will continue the tour with a visit to Aryabal meditation temple - surrounded by scenic mountains with massive rock formations and sitting atop the mountain. The distance between the gate and the actual temple is around 1 km and it is only accessible by walking. To get to the top, you will cross the suspension bridge and climb up on 108 stairs, according to Buddhist prayer beads. This small hike is seen as a ritual to cleanse one’s sins. From the top, you can enjoy the breathtaking view overlooking the Terelj National Park.

Today we will take a 1.5 hrs drive to Gun Galuut National Park, which is a harmony of mountains, hills, steppes, grasslands, rivers, lakes, and wetlands. This area is protected by a local administration for conservation of endangered species. We will check in and have lunch at Steppe Nomads Ger camp. In the late afternoon, we will explore the surrounding area and take a short drive to observe wild sheep.

This morning, we will return to Ulaanbaatar. On the way, we’ll visit “Genghis Khan Statue Complex” which is currently the biggest (130 feet high) equestrian statue in the world. There is a recreation area, restaurants, and souvenir shops occupy the area around the base structure. From here, you can ascend to the head of the horse using an elevator. There you’ll have a good panoramic view over the complex area and the scenery beyond. After lunch in the city restaurant, we will transfer to the hotel. You’ll have time for relaxing and refreshments until 5:20pm. If you would like to go shopping for souvenirs and local products, your guide will be ready to cater for that. We will attend the “Wonders of Mongolia” folklore show by the Tumen-Ekh ensemble - they are one of the most successful folk-art groups to share traditional Mongolian music with the world, having traveled to over 40 countries, and this will be a real highlight of the trip.

Day 10: Departure from Ulaanbaatar to Beijing

As your memorable trip comes to end, then you will be transferred to the central train station for your train to Beijing. The train ride will take a full day. 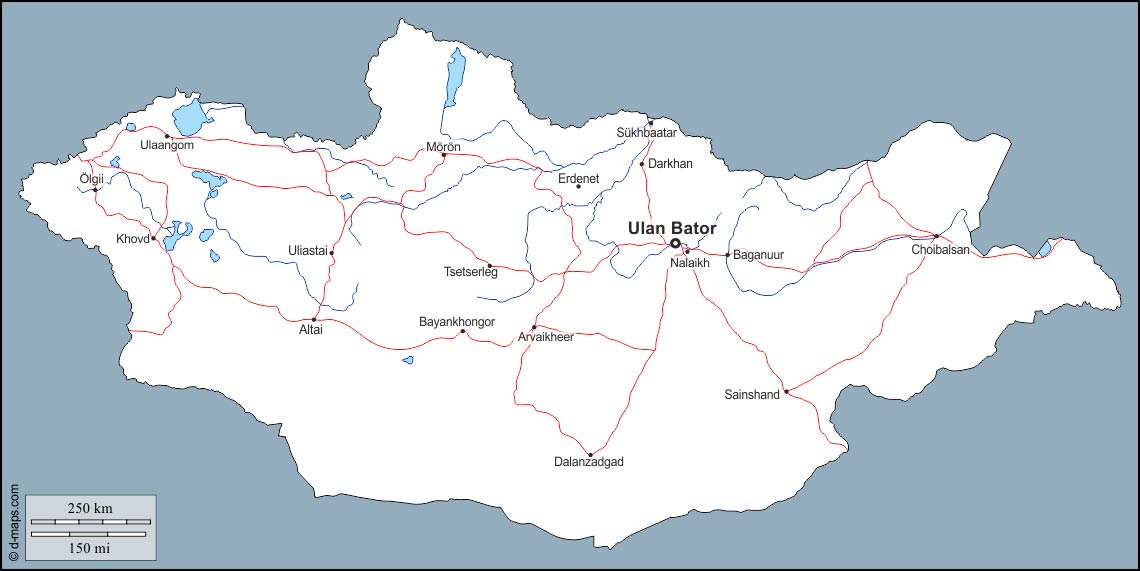